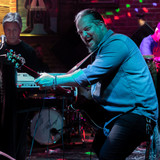 New Jersey born Mike Freund hasn't had much luck with music: his first paying gig was derailed by a night in the ER after a car crash. Later, his equipment was stolen after a burglary at the recording studio he played at.

But he's gone on to win, and be nominated for, many local music awards in the bustling hub of Charleston, where he's ended up. His first full-length solo album, Toe The Line, was a hit with bloggers, and he's now wrapping up the release of his sophomore record, And Now You Know. So maybe Mike Freund isn't unlucky after all. Maybe the hardworking blues rocker just needed to find his niche: and that he has, hammering out woozy, rollicking anthems that are sure to get you dancing.