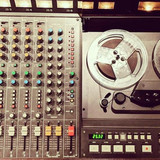 Death by Dub draws from the long history of reggae music and sound system culture, creating instrumental music that is fully saturated in the idioms of dub music, both in live performance and in the recording studio. The project is led by Dan Africano and Scott Flynn, both of whom have spent years steeped in the world of dub and reggae music playing with one of the greatest American reggae bands of all time, John Brown’s Body. Around 2017, Dan and Scott both moved to Denver, Colorado, and it was there they decided to start something new and original in the style of dub/reggae that they both loved so deeply. After a few writing sessions and a couple days of recording at the recently christened Color Red Studios, Death By Dub was born.