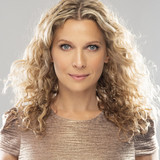 and Reba McEntire. Her story is the stuff movies are made of. A girl in Star City, Arkansas spent summers traveling to bluegrass festivals, the curly-haired girl dancing to fiddles and banjos. The utopia is interrupted when her idyllic home breaks up, rocked by infidelity, and her world is turned upside down. She retreats to the radio, back to her sad country songs. In the aftermath, she puts her college plans on hold, and in a few short years, this small-town girl makes her Broadway debut. Fast forward a few years when history catches up to her and she’s playing the part her mother originated, blown sideways by cheating.