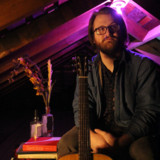 Created in the summer of 2018, while taking a short break from performing with his previous band Afro Jim, Colton Cox began working on a set of bombastic new songs drawing upon an array of influences, from 60s/70s rock and funk, to folk, modern R&B, and jazz. The first product of this new set of music was the fiery, electrically charged "Rubber Band Girl", co-written by Cox's friend and fellow musician, Aaron Plummer. With this powerful first release, Cox officially set out on his solo career, determined to take the world by storm. After Afro Jim disbanded at the end of 2019, Colton moved to Kansas City to start anew, and began writing loads of new music throughout 2020, both in private, and in front of live-streaming audiences during various marathon writing sessions he has since dubbed "The Sketchbook Collections".

His first solo EP is set to be released in the spring of 2021.