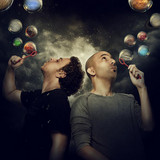 Regarded as the fastest rising psytrance artists of their generation, Afula natives Matan and Aviram – best known as Vini Vici - have succeeded in propelling the genre to the forefront of the electronic music circuit through their energetic performances and inimitable productions. Paving their way to global stardom, their breakout hit ‘Great Spirit’ was the most played track of Tomorrowland 2017 and their subsequent productions have seen them collaborate with the likes of Dimitri Vegas & Like Mike, Steve Aoki, R3HAB, and more. Flying the flag for the psychedelic trance genre, Vini Vici were the first ever psytrance act to play the main stages at Tomorrowland and ULTRA Music Festival and to perform at Lollapalooza. Soon no major festival lineup was complete without the duo. Rocking the stages at Tomorrowland , Electric Daisy Carnival, ULTRA, A State of Trance – you name it Vini Vici have played it. 2018 saw them charting at #34 on the DJ Mag Top 100, scooping the ‘Highest Climber’ award and placed as Beatport’s Bestselling Psytrance artist for a fourth year running. In 2020 the world witnessed Vini Vici break into the Top 30 Top Dj’s of the world, charting #24 on the DJ Mag annual poll. Vini Vici also launched their own record label Alteza Records, which has produced an array of top-class releases as well as seen them host their own stage at Tomorrowland in 2019 and 2020. They came, They saw and They continue to conquer.