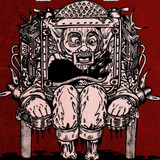 Rat Face Lewey are a 3 piece Alt Rock band From the East Midlands, formed by brothers Jonny (lead vocals/guitar) and Mav (bass) with Greg on drums. The band’s early years were served in South London, where the young upstarts cut their teeth writing and performing around the London circuit. By 2013, the trio had released their debut album, Wonder Before Mess. The tracks from the release went out to grace playlists throughout the globe. In 2015, they continued their climb with the release of singles, Dead in the Ground and Digital Prison. The industrious crew’s new album, The Fall Of Man, certainly raises the bar. Serving up a slew of memorable tracks, such as Comfortable and The Pirate Song. The record showcases the group’s adept ability to create genre spanning, hook laden, adrenaline fueled alt-rock drenched with passion and melody.