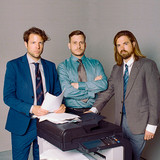 The Berlin-based Brandt Brauer Frick make what they call "emotional body music," or lean techno with supple and primarily acoustic instrumentation, drawing from the work of minimalist composers Steve Reich and Philip Glass and electronic music producers such as Plastikman and Ricardo Villalobos. They made their full-length debut with You Make Me Real (2010) and have since released four additional studio albums. These include Miami (2013), with guest vocalists ranging from post-punk pioneer Gudrun Gut to alternative R&B innovator Om'Mas Keith, and Joy (2016), on which the group backed singer/poet Beaver Sheppard. BBF marked ten years together with Echo (2019), made in the spirit of their early work as they applied a decade's worth of exploration and experience. Friends Daniel Brandt, Jan Brauer, and Paul Frick debuted as a trio in 2009 with the 12" singles "Wallah" and "Iron Man," released respectively on The Gym and Tartelet. At the time, the only other significant group achieving similar sounds was the Moritz von Oswald Trio. The !K7 label subsequently signed BBF and released their first LP, You Make Me Real, in November 2010. Mr. Machine followed in October 2011. Credited to the Brandt Brauer Frick Ensemble, it involved a ten-piece orchestra, new versions of four songs from the first album, and a vocal track written by and featuring Emika. In March 2013, the trio released their third album, Miami, a set not as directed toward club DJs, with guest vocal appearances from Gudrun Gut, Nina Kraviz, Jamie Lidell, and Om'Mas Keith. BBF performed at a wide range of venues and festivals, including Montreux Jazz, Lincoln Center, Coachella, Mutek, Sonar, and Berghain. A wide-scoped installment in !K7's DJ-Kicks series followed in February 2014. The group's fourth studio album, the expansive yet concise and song-oriented Joy, was released in October 2016 with singer and poet Beaver Sheppard featured throughout. BBF returned in June 2019 with Echo. Primarily instrumental, its only featured vocalists were Friedberg (aka Anna F.) and Catherine Ringer (Les Rita Mitsouko, Plaza Francia). ~ Andy Kellman, Rovi