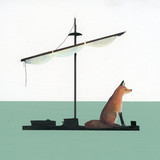 Stephan Eicher (born August 17, 1960) is a European sensation. This Swiss native had a monumental career throughout the '80s and '90s, exploring his vocal strengths with electronic music. But as a teenager in Western Europe, he was fond of the punk rock spirit popular in the late '70s. At age 17, he and younger brother Martin founded a punk-techno act called Grauzone. The single "Eisbar" went on to sell nearly 500,000 copies across Germany and Switzerland. During this time, he also befriended the girl group Liliput and had a chance meeting with future manager Martin Hess. Eicher's solo career was born. His first album, Chansons Bleues, was issued in late 1983 and was obviously influenced by New Order. A year later, he put his musical palate to the test by singing in German, French, and English on his second album, I Tell This Night. Countless shows around Europe pushed Eicher into the limelight. He changed up his signature electronic sound for a third album, 1986's Silence. With this particular record, Eicher played with other musicians for a more abrasive sound. My Place took things further. Eicher's fascination and respect for novelist Philippe Djian was now a part of his work and would continue to be a part of his musical direction for the rest of his career. By the '90s, Eicher had four albums behind him and was an international success. Engelberg, named for a Swiss ski resort, appeared in 1991, and singles "Hemmige" and "Dejeuner en Paix" pushed the album to sell nearly two million copies worldwide. 1993 saw the release of another album, Carcassonne. Named in honor of a city in southern France, Carcassonne again included songs referring to the works of Djian. In 1994, he played over 100 shows across Europe and Africa, and recorded his first live album, Non Ci Badar, Guarda E Passa, later that year. Two years following, 1000 Vies was released. Louanges was issued in 1999. ~ MacKenzie Wilson, Rovi