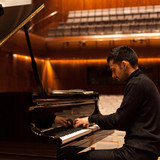 Following his London debut at the Royal Festival Hall, Alexander Soares has garnered a reputation as a pianist who combines “huge intensity” (The Telegraph) with “diamond clarity and authority” (BBC Radio 3). Rising to international attention in 2015 after winning the Gold Medal in the prestigious Royal Overseas League Competition – and his subsequent selection as a solo artist by City Music Foundation – he has performed in major venues and festivals across the U.K., Europe and United States, and is regularly broadcast on BBC Radio 3, France Musique and SWR2, Germany.   Alexander signed with Rubicon Classics in 2019. His debut album Notations & Sketches was selected as Gramophone Editor’s Choice, and praised as “a stunning album” (FranceMusique). As a Guest Artist he has also recorded for KAIROS on Gonçalo Gato: NowState and Delphian Records on Isolation Songbook   For more information please visit www.alexander-soares.com