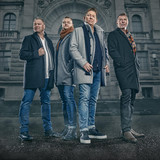 Casanovas with the leadsinger and producer Henrik Sethsson as the frontperson is undoubtedly one of the biggest bands on the modern dance bandscene in Sweden today. The band have several nominations and awards from Grammis (the Swedish Grammy), Guldklaven (in 2017 they won the prestiogious prize for the most popular band of the year and the best album of the year) and they have also won the prestigious Manifestaward twice. Casanovas was founded in 1989 in Vadstena. In 1998 the band won the Swedish dance band championships.