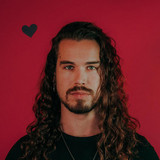 “Hi everybody, it’s Sheridan. Wherever you found me, I’m glad you’re here now.” Austin-based by way of California, Sheridan released his debut single, “We Should Both Be Here,” in 2018. A nationwide tour marked the start of an eventful two years for Reed—releasing an EP and a handful of singles praised for their “mastery of combining soul and pop with intense passion and quiet sentimentality.” Sheridan’s music is a mix of inspiration taken from songwriters like Allen Stone and BJ The Chicago Kid as well as genre-pushing artists a la Anderson .Paak. Soulful lyrics built on self-reflection and personal experiences are the core of Sheridan’s songwriting—a form of personal therapy that he hopes extends to his listeners. An appearance on network television in early 2020 made way for the ballad "Coming Back,” which quickly surpassed 100,000 streams and saw Sheridan return to the studio, ready to redefine his sound. Pulling inspiration from classic R&B in the vein of Timbaland and Justin Timberlake, his latest single, “Feeling You,” was released in June to critical acclaim. The song is the next step in the evolution of Sheridan’s sound that looks to combine his love for Jazz, Soul, R&B and Hip-Hop into something new and exciting.