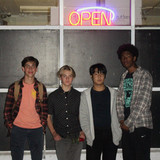 Cross Eyed Strangers is an East Lansing based Alternative band. All songs are written, recorded, and produced by the singer and songwriter, Wes Millhouse. The band began by playing songs from Wes Millhouse's solo catalog around the Lansing area. Eventually, the band released a couple new singles after their first EP, ‘Let It Fall’, to prepare for their upcoming album, ‘Darker’.   Wes is very inspired by newer indie and alternative sounds, and often times underground music. The rest of the band has heavier classic rock and R&B inspirations. When these sounds mix you get their sound.   They played their first headlining show at the Pumphouse, and later played at Mac's Bar and Pumpstock. They also played their album release show in downtown East Lansing, and had an article written in the East Lansing Info about them. They continue to look for any gigs they can find and will be playing around. Also make sure and listen to their new singles, ‘Darker’ and ‘Shimmering Light’, and stay updated on when their upcoming album is coming out!