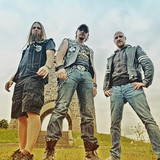 Grimgod kicking asses since 2013... Grimgod is a german metal band with a hard rock attitude. In 2013, after the breakup of the thrash metal band Vagabond, Jax and Richy got a vision of a new band. Mid tempo, grooving, deep, something with balls. Kenneth, who also was part of Vagabond, became the bass beast and so Grimgod was born. 2015 the debut album "BEAST" was released. 7 Songs that kick ass and also got top ratings in reviews. The band took this base and developed their unmistakable style over the next years. The shows they got, became bigger. Grimgod rose to a well known force in the german metal underground. A highlight became the "End of the World Tour" (2017) with the godfather of Death Metal, Mr. Paul Speckmann (Master), that lead the band through whole Germany, Netherlands and Switzerland. This tour made the boys grow to a real badass rock band and set the course for the future of Grimgod. In early 2019 the second album "MASTER" was unleashed. Again 7 Song, again best ratings in the press. The new release "BEASTMASTER" is the conjunction of the two albums, the ultimate Grimgod collection, so to speak. For all you Booze Brothers and Beasty Betties out there: Get some beer and look out! Grimgod's incoming! Lineup: Jax Warner - voc. & guit Richy Wilkinson - drum. & backing voc. Kenneth Maxwell - bass