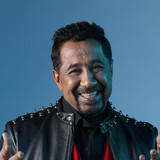 Born in Algeria but now based in France, Khaled is known as the king of rai. He was born Khaled Hadj Brahim in 1960 in Sidi-El-Houri. Along with Egyptian, Spanish and French music influences, Khaled also listened to the Beatles and James Brown as a child. After learning to sing and play accordion, he left school at age 16 to record his first single. With a blend of funk, reggae and Arabic music, Khaled soon pioneered the transformation of rai from a local style to worldwide popularity by adding a synthesizer and drum machine. He moved to France in 1986 and released Kutche, his debut album. His first domestic work was a 1993 self-titled album. N'ssi N'ssi appeared the following year. 1996 saw the release of Sahra, and three years later King of Rai appeared. In early 2000, 1,2,3 Soleils, a trio recording also featuring Rachid Taha and Faudel, was released. Elle Ne Peut Pas Vivre Sans Lui was issued later that fall with El Lil Ou Nour appearing in early 2001. ~ John Bush, Rovi