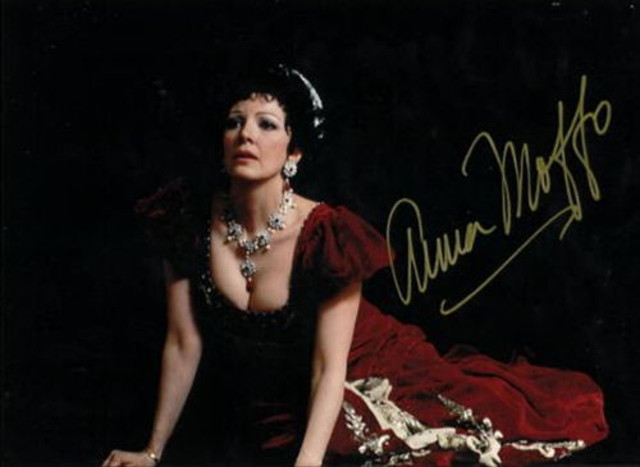 American lyric-dramatic soprano Anna Moffo rose quickly to become one of the world's best-known opera singers in the 1950s and remained a leading star into the 1970s. Her parents were Nicolas Moffo and Regina (Cinti) Moffo. Anna made her singing debut at the age of seven in a school assembly with Mighty Lak' a Rose. She sang frequently in her town and surrounding regions. Possessing notable beauty to go along with her voice, she was offered a chance to audition for Hollywood. She elected music instead, winning a four-year scholarship to study at the Curtis Institute of Music in Philadelphia. Her teacher there was Eugenia Giannini-Gregory. She won the Young Artists Auditions in 1955. A Fulbright Scholarship the same year enabled her to travel to Italy and study at the Accademica di Santa Cecilia in Rome with Luigi Ricci and Mercedes Llopart. To help support herself she worked as an X-ray technician and typist. She debuted on stage as Norina in Don Pasquale (Donizetti) at Spoleto. Her warm, lyric voice and full tone attracted much attention, while her slim, attractive figure and beautiful stage appearance suited her to visual media. She was engaged to sing the title role of Butterfly by television director Mario Lanfranchi. This 1956 broadcast made her an instant star in Italy, and gained her international fame. She sang other Italian television opera productions, including Lucia di Lammermoor and La fille du régiment. She made her French debut in 1956, singing Zerlina (Mozart's Don Giovanni) at Aix-en-Provence. She appeared throughout Italy, and debuted at Teatro alla Scala in Falstaff in 1957. She first appeared in America as Mimì in La bohème at the Lyric Opera of Chicago. In the same year she married Lanfranchi. On November 14, 1959, she first sang at the Metropolitan Opera in what was to be one of her most important roles, Violetta in Verdi's La traviata. In 1960 she began to host a program about opera on Italian television, The Anna Moffo Show, which continued until 1973. She was voted one of the 10 most beautiful women in Italy. In the 1960-1961 season she sang three roles at the Met: Gild in Rigoletto, Adina in L'Elisir d'Amore, and Liù in Turandot, with Franco Corelli and Birgit Nilsson. She was a major vocal recording artist on the RCA Victor label. Some of her other important roles were Pamina (The Magic Flute), Luisa Miller, Debussy's Mélisande, a sparkling rendition as the heroine in Offenbach's operetta La Périchole, and all four leading female parts in the same composer's Les contes d'Hoffmann. She sang at the major European opera houses, and was most associated over he career with the parts of Violetta (which she sang over 900 times) and Lucia di Lammermoor (500 performances). She appeared in filmed and videotaped operas, but also in non-operatic dramatic films, including the prize-winning Una storia d'amore. In 1972 she and Lanfranchi were divorced and she married Robert Sarnoff, the chairman of RCA. By 1974 she had sung 220 performances in 18 operas at the Met. She had allowed herself to be pushed into making too many commitments and in that year she suffered a severe vocal collapse, which kept her off the stage for two years. When she returned, she focused more on lyrical parts, but soon was able to expand to the more dramatic roles by Verdi (Leonora in Il trovatore, for instance) and in 1991 added Bellini's Norma. In 1999, the Met honored her with a gala celebrating the 40th anniversary of her debut.