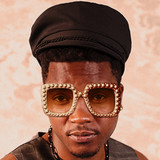 Cimafunk is the 2019 revelation of the year in Cuba and one of the 10 Latinos artists to follow according to Billboard.

Singer, composer and producer, Cimafunk offers a subtle and bold mix of funk with Afro-Cuban music, a life-affirming sound, a UFO in the island's music scene. His name encapsulates his musical compass: in Cuba, the term ‘cimarrón’ refers to the rebellious black slaves who escaped slavery and fled to the wild to live freely. It is a term that captures his claim for black Cuban heritage but also his willingness to liberate himself from well-trodden musical paths. Cimafunk experiments and does not shrink from any musical association as long as the groove irresistibly takes possession bodies. His lyrics come from Havana’s streets and play wisely with implicite and double meaning. He spins erotic and culinary metaphors to describe Cuban’s daily life. Cimafunk matured his album through his live shows. With his 8 piece band, he cultivates crazy alchemy made of an effective groove and musical, vocal and danced improvisations. His tasty and stellar live shows leave no one indifferent. His groove takes over your body, and you can do nothing but dance and join the cathartic communion of the bodies.