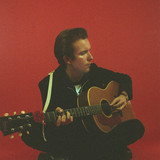 Theo Lawrence is a young, independent French-Canadian songwriter, musician & singer based out of Bordeaux, France. His music is rooted in the country music songs of the 1950’s and 1960’s, borrowing elements from Soul, Pop, and Rock ’n’ Roll of the same era.

A mix of styles & sounds, done with a deep love for tradition, while bearing the mark of modern times. His newly-founded label, TOMIKA RECORDS, will release all future productions and will be home to other kindred spirits sharing the same passion for record artistry and tradition.