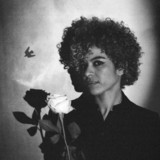 Roseblood is the new labour of love from Kathy Foster (The Thermals, All Girl Summer Fun Band, Hurry Up). For years, she’s been writing and recording her own songs - under various aliases - in bedrooms, basements, attics and garages, but she’s never strayed too far from the shadows except for a handful of solo shows and a few DIY releases. Now with her beloved band, The Thermals, coming to a close after 15 years and 7 albums, she is bringing her solo songwriting into the light. Kathy came up as a musician in the 90’s Bay Area DIY scene, surrounded by punks, hippies, grungers, 4-trackers, stoner rockers, shoegazers, riot grrrls and indie popsters. Drums were her first instrument, followed by guitar, the 4-track, bass, and keys. She quickly fell in love with playing multiple instruments and recording. She started playing in bands at 17, and making recordings around the same time. In Roseblood, Kathy is the sole songwriter, arranger and studio instrumentalist. With a genre-spanning love of music, she’s focused on creating a cohesive sound that channels influences of 50’s/60’s girl groups, garage &amp; soul, desert blues, lo-fi fuzz rock and post-punk. She’s also brazenly embracing her dark, emotional side, writing songs

heavy with themes of love, loss, heartbreak and isolation.