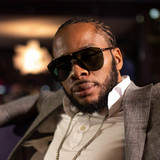 Songs such as "Shabba Madda Pot" (2015), "3G" (2016), and "21" (2017), all of which have been placed on volumes of VP Records' Strictly the Best series, have made Dexta Daps a dancehall mainstay known for appealing to the streets and bedroom. During the year "21" was issued and licensed for Strictly the Best, Vol. 57, Dexta also released his first album, Intro. The vocalist has since issued Vent (2020), his second full-length showcase. A proud native of the Seaview Gardens neighborhood in West Kingston, Dexta Daps (born Louis Anthony Grandison, Jr.) has been an active recording artist since the turn of the 2010s. During his first several years of studio work, he appeared on numerous riddim compilations, released singles such as "Shabba Madda Pot" (honoring Shabba Ranks' mother, a beloved Seaview matriarch), and recorded with M.I.A. ("Foreign Friend"). Intro, a collaboration with the Daseca Productions team, was issued in 2017 as his debut album. Singles and featured appearances throughout the next couple years led to the 2020 arrival of his self-released second album, Vent. Among the set's standouts were "Breaking News," "A Plus" (a duet with Spice), and "Obviously" (featuring Beenie Man). ~ Andy Kellman, Rovi