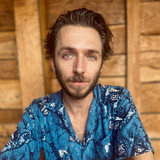 After a 3 year stint in psych rock band The Wild Jays, singer/guitarist Trevor Willmott began exploring other musical outlets. While searching for a new sense of purpose as both a songwriter and producer, he found the inspiration for Cujo Moon ─ a revival of his songwriting roots in alternative folk. The production is reminiscent of Neon Rain (Willmott’s previous acoustic duo with friend and drumming virtuoso Vinay Shroff) which was featured on Coldplay’s website for their song “To The Moon” and highlighted by Derek Webb for their second album “Wintersong.” Cujo Moon takes the same moody and minimalist approach but fuses it with a more layered and atmospheric sound full of strings, synths, and dramatic builds.   Now partnered with Tone Tree Music, alongside artists like Joy Williams (of The Civil Wars), Svrcina, Katie Herzig, Matthew Perryman Jones, Molly Parden, Lydia Luce, and Becca Mancari, Cujo Moon has music slated for release throughout 2020 and 2021. So far, the songs have been written, recorded, and produced by Willmott in his home studio on the west side of Nashville, TN. The sounds coming out reflect an introspective artist at play in a familiar albeit isolated environment, drawing from a reflective and healing headspace.