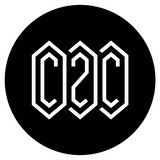 Consisting of DJ Greem and MC 20Syl (from jazz-rap collective Hocus Pocus) and DJs Atom and Pfel (from electro hip-hop duo Beat Torrent), C2C are widely regarded as one of the most accomplished turntablist crews in the world. Formed as Coups2Cross in Nantes in 1998, the quintet made its recording debut on Hocus Pocus' sophomore album Seconde Formule and went on to appear on the band's 2005 release 73 Touches and 2007's Place 54, but C2C made their name on the competition circuit, winning the Disco Mix Club World Team DJ Championships for a record-breaking four consecutive years (2003-2006) and the 2005 ITF Team Championships. After touring the world with the likes of the Scratch Perverts, DJ Vadim, and Q-Bert, they finally released their debut EP, Down the Road, in 2012. ~ Jon O'Brien, Rovi