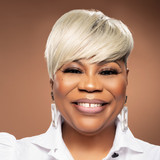 Maranda Curtis is a praise & worship leader and gospel singer based in Miami, Florida. The daughter of Pastor W.S. Curtis and his wife Darlene, Maranda was born and raised in Miami, Florida. She started singing as a child, eventually going professional as an adult. She married Pastor Jamill Willis in 2010, adopting his last name. She released her debut single, "Don't Take Your Love Away," under the name Maranda Curtis Willis in 2012. The pair would divorce in 2016 and she reverted to her birth name. Maranda Curtis released her debut EP, The Maranda Experience, Vol. 1, in 2017, debuting at number one on Billboard's gospel chart in August of that year. The concert album, Open Heaven: The Maranda Experience Live, appeared in 2018. ~ Stephen Thomas Erlewine, Rovi