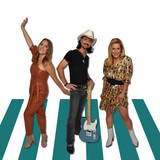 MORE THAN WORDS are Stefanie Hertel, Lanny Lanner und Johanna Mross. Music is their greatest passion. On and off stage. The modern patchwork family has taken its music from the living room couch onto the Big Stage. On May 15th 2020 the band released the debut album “HOME”, which immediately climbed to #1 (for 10 weeks) on the Amazon Country Newcomer and Bestseller Charts in Germany. With this album the band has charted out its musical direction and proven that modern Country-Rock-Pop can mesmerize audiences not just in Nashville. Stefanie Hertel, being a Superstar in Germany, Austria and Switzerland for over 30 years as a solo artist and TV show host, has embarked on a new musical journey with her husband Lanny Lanner (who has toured the world and lived in New York City for 10 years as a performing musician and songwriter) and their daughter Johanna Mross after being fascinated by the US TV Show “Nashville”. When Johanna turned 18, she decided to set foot into the limelight herself following her mother's and stepfather's footsteps. Soon after that “More Than Words” was born. 2019 the band toured with famous British rock legend Bonnie Tyler. The tour 2020 was postponed due to the corona situation, but the band will be touring Europe with Bonnie Tyler and the Gipsy Kings again in 2021.