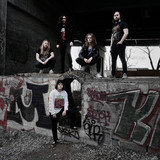 The Overthrone is one of the latest additions to the Stockholm metal scene, a scene that has gained respect from all over the world due to revolutionary bands like Entombed, Opeth, Candlemass, the list goes on. The Overthrone’s vision and goal is to become a part of that list. The band has a yet small but powerful repertoire with influences from bigger metal bands such as Sylosis, In Flames, Revocation and The Black Dahlia Murder. The band members derived from various bands in the Stockholm county area that never really became a household name among the people of the Stockholm underground scene. The Overthrone is now a group with endless potential and they are here to stay and ready to show the world that they belong on the biggest festival scenes! With their debut EP released, the band was received very well by audience. While not only gaining a substantial amount of listeners on Spotify and being featured and reviewed by a great deal of bloggers, reviewers and reaction channels, The Overthrone were also nominated for the “Yearly Newcomers” award at the “Manifestgalan” in Sweden year 2018. With a mixture of old and new, The Overthrone brings a little something for all to enjoy. Whether it’s hard, thrashy and heavy riffs with brutal vocals or melodic solos, melodies and vocal lines, The Overthrone thrives to give their fans and audience the best live and listening