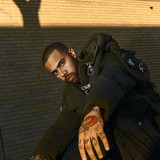 Chicago rapper Vic Mensa earned ample underground cred before breaking through to mainstream audiences, as a founder of the SAVEMONEY collective, a member of the hip-hop group Kids These Days, and a solo artist. He made his solo debut in 2013 on Chance the Rapper's high-profile mixtape Acid Rap, and followed shortly thereafter with music of his own. His bright lyrical style called on influences from the more positive side of '90s hip-hop as well as notes from rock and pop music. His unique style and frequent collaborations with Chance the Rapper attracted the attention of Roc Nation, which signed Mensa and issued his 2017 studio debut, The Autobiography. Born Victor Kwesi Mensah, the rapper issued some solo product while a member of the hip-hop group Kids These Days, including the Straight Up EP in 2010, but it wasn't until their breakup in 2013 that he considered making a career out of going it alone. He didn't squander any time, either, as he formed the SAVEMONEY crew in 2013 and appeared on fellow member Chance the Rapper's Acid Rap mixtape that same year, along with issuing his own mixtape, Innanetape, a mixing of the words "Internet" and "mixtape." Like Chance's before, Mensa's mixtape was both a critical and download-counting success, so much so that the independent rapper joined major-label artists J. Cole and Wale on their What Dreams May Come tour in 2014. That same year, he topped XXL Magazine's Freshman Class list and released the hit single "Down on My Luck" on Virgin Records. He then appeared alongside Sia on Kanye West's 2015 single "Wolves," and Kanye returned the favor with a feature on "U Mad," Mensa's first single for his new label, Roc Nation. There's Alot Going On, Mensa's debut EP, arrived in 2016, followed a year later by the Manuscript EP. Also in 2017, Mensa delivered his proper full-length debut album, The Autobiography, which featured guest spots by Weezer, the-Dream, Chief Keef, Pharrell Williams, and others. Included on the record was the single "Wings." The well-received album debuted at number 27 on the Billboard 200. The non-album single "Reverse," featuring G-Eazy, arrived in 2018. The following year saw Mensa issue a slew of singles, including collaborations with 93PUNX ("Camp America"), the Rubens ("Falling Asleep at the Wheel"), and Jesse ("Let U Know"). Mensa's fifth EP, V Tape, arrived in August 2020. ~ David Jeffries, Rovi