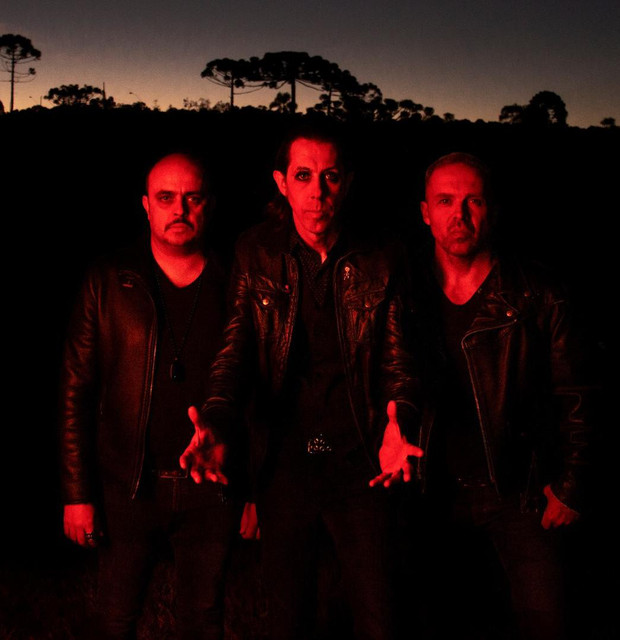 The Secret Society is a gloomy and heavy three-piece band formed in 2017 by Guto Diaz (bass and vocals), Fabiano Cavassin (guitars) and Orlando Custódio (drums). With influences raging from Hard Rock and Goth Metal to Post Punk and Death Rock, in 2018 they launched their first three singles “Fields Of Glass”, “The Architecture Of Melancholy” and “Deciduous (Les Feuilles Mortes)”, one music video for “The Architecture Of Melancholy” and a lyric video for “Fields Of Glass”. The band spent most of that year doing promotional concerts

and festival appearances, sharing the stage with Uli Jon Roth, Dee Snider, Shaman and Angra, calling attention on the rock media with excellent reviews. In october 2019 The Secret Society released their debut album entitled “Rites Of Fire”. Recorded between may and august at Nico´s and The Secret Bunker studios in Curitiba, the record was produced by the band along with producer Luciano Nunes and mixed and mastered by Adriano Daga. The album release was followed by a series of concerts sharing the stage with Europe, Deathstars and The Sisters Of Mercy with concerts in Brazil, Bolivia, Chile and Mexico. Along with the album they released a new music video for the track “Rubicon”. January 1st 2020, saw the release of the new single “A New Day”. At the moment they are working on new material for the follow-up to “Rites Of Fire”.