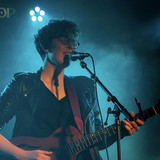 Emerging and unsigned alternative acoustic singer-songwriter, Jessie Dipper, (now Cardiff based) released her debut album 'Audience of One' in the summer of 2019. In a few short years, Jessie has successfully released two EPs, gigged up and down the UK and toured Melbourne (Australia) and Auckland (New Zealand) in 2018 as well as included Uganda (2015), Sri Lanka (2016), Romania (2018) and The Netherlands (2018) in her performance repertoire. Showcasing her unique musicianship of with grit to falsetto vocal abilities and folk-grunge inspired acoustic and electric guitar capabilities, with a persona to captivate an audience with her quirky, and conversational demeanour and stage presence, complete with odd socks. For fans of Tash Sultana, Jimi Hendrix and Ed Sheeran