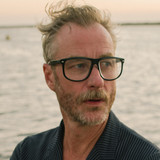 A singer recognized for his deep baritone, brooding delivery, and contemplative, literate lyrics, Matt Berninger rose to fame during the 2000s as front man of Brooklyn indie rockers The National. Emerging early in the decade amidst a garage rock revival that included bands like The Strokes and The Walkmen, The National drew from a wider set of influences, including alternative country-rock, Americana, and chamber pop as well as post-punk. Their earliest albums won a dedicated fan base and critical praise before they made an impact on the charts with their fourth LP, 2007's Boxer. The National catapulted into the Top Three of the album charts with 2010's High Violet, and have remained a Top Three act throughout the decade as band members pursued other projects, including Berninger's new wave-influenced duo, EL VY. In 2016, Berninger co-founded “7-inches for Planned Parenthood”, a curated series of records featuring music, comedy, spoken word, and visual art released in support of Planned Parenthood Federation of America. 2017's Sleep Well Beast made Berninger and his National bandmates Grammy winners and 2019 saw the release of their most recent album, I Am Easy to Find. The singer's many collaborations have included songs with Andrew Bird, Booker T. Jones, Jon Brion, and Julien Baker. Berninger’s first solo record, Serpentine Prison, will be released in 2020.