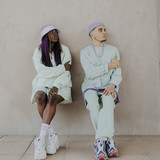 We’re SoulBox... A duo hybrid mix of rap-soul-pop based in Manchester. We formed our sound in 2016 and released our first album ‘Your Love’ in 2018 which hit some major playlists. We exist to perform to the 1’s and 2’s in schools and prisons but thrive in front of 1000’s from the Manchester 02 arena to massive festivals around the UK   Our music is narrated and inspired by two things: story and hope. We’re dropping a lot of new music in 2022. We hope you enjoy the adventure!