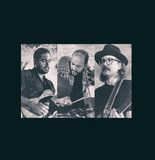 Stucky Jackson and the Boys

Formed in 2015 in the center of the universe (Fremont, Seattle) like neutron stars, Stucky Jackson and The Boys (Kiley Kesecker and Joseph Cable) formed a dense mass of heavy elements. But instead of Polonium, Iron, and Gold, they synthesized the gravel-pit-born voice and nerve-fiber-vibrating guitar licks of Stucky, the stoic and introspective bass lines of Mr. Cable, and the loungy, silently rage-fueled percussion of young Kiley. Expressing both the pain and glory of America's rich musical history, from Blues and Jazz to the true American heartland's classic Grunge, their first album "Subito" (2017) sent gravitational waves through Seattle's neighborhoods and out into the vast reaches of space itself. In 2018, to a cacophony of celebratory rioting, the Fourth Horseman of the Apocalypse (Saba Samakar) joined the band. Stucky Jackson and the Boys will continue to express new sonic representations of the ethos in the center of the universe and dredge up reservoirs of metaphorical crude oil in the form of the great musical movements of America's past. Floating in zero gravity where all light has been replaced with sparks from striking high-hats and flint guitar strings, Stucky Jackson and the Boys will linger eternally, playing the melodies we all will find at the end of space-time.