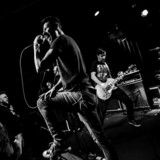 Formed in 2010, Denver, CO’s Poor Me has always been a passion project. Members Brett Delaney (vocals), Nick Chmel a.k.a GIR (drums), Nick Butler (guitar), Jason McWhinnie (guitar/backups), and Mike Goyn (bass/backups) all work real jobs. They all come from humble beginnings. And they all make music like their life depends on it. Punk rock isn’t a road to riches (anyone who’s ever seen a sticker-caked tour van knows that), but Poor Me has made good on their time as scene stalwarts. “We aren’t a party band,” says Delaney. “We want the songs to have a message of solidarity, be rich in empathy, and make people think.” It’s this empathy that serves as Poor Me’s backbone, but it doesn’t come without a note of hope—this is positive music about making the world a better place, in spite of everything else, humming with the energy and melody of Revolutions per Minute-era Rise Against. “Life is pretty good,” says Delaney. “We want that for everyone.” Poor Me will keep singing, strumming, and screaming for that dream, fueled by a passion for a better future.