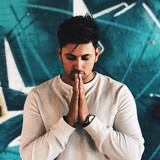 JASH has been creating a buzz over the past few years, and great things are expected this year. His first single gained Massive national radio play as well as great support from the BBC networks across the UK. This was followed up with another single which was signed to a Sony Sub label in Dubai. JASH then released “Now You’re Gone” which was produced by the duo Empty Pockets who have produced songs for James Arthurs, The Vamps & The Chainsmokers. The song was again a great success and a building block, with BBC network support and radio plays in the UK. Now You’re Gone also climbed in the Official Commercial Club Charts for several weeks before breaking into the top 10 and reaching number 7 (published in music weekly). JASH also decided to give all the money raised from this single to help those who were affected by the Manchester Terror Attacks. Making the world a better place is one of his dreams. JASH toured the UK for 2 weeks, visiting and performing in over 25 schools across the nation. Gaining much support and publicity from the local newspapers and the students, JASH was speaking about online safety and how to tackle cyberbullying. This combined with performances of his songs got people talking and excited for what was next to come from this artist. JASH has now decided to alter his focus and has decided to drift into a more Urban / R&B style of music. His song “It’s You” and “Obsession” are very much different from his previous work.