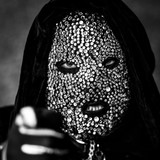 Barry Purkis, aka Thunderstick, began drumming for Iron Maiden in 1977; a year later he joined Samson where he spent the next three years as the New Wave Of British Heavy Metal’s most controversial figure - the masked drummer. Aside from appearing on Samson’s three albums, Survivors, Head On and Shock Tactics, he also appeared on the Gillan set, For Gillan Fans Only. After Samson he teamed up with Gillan guitarist Bernie Torme in the Electric Gypsies, where he remained until forming Thunderstick the band in 1982. Adopting a more theatrical look, he put together a Screaming Lord Sutch / Alice Cooper styled show featuring the strong vocals of US singer Jodee Valentine setting them as one of the first female fronted metal bands. The band performed and recorded until late 1980 before disbanding. The death of former vocalist Jodee Valentine in 2016 prompted Thunderstick to record and release a new album 'Something Wicked This Way Comes' in tribute to her. Show offers started coming in so Thunderstick swiftly put together a band to tour the album.

And so to a post pandemic 2021, Thunderstick is back with a permanent line up, new music and, fronted by the incredible vocals of Raven Blackwing, they look set for a promising 2022. Thunderstick are THUNDERSTICK - Drums RAVEN BLACKWING - Vocals REX THUNDERBOLT - Bass Pete J Pinto (PANTHER) - Guitar Dave 'BUTTERS' - Guitar