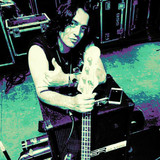 Italian rock /alternative singer, songwriter and bassist, winner in 2017 of the MEI prize for Best Italian Alternative Bassist . In his career, in addition to publishing three solo albums, he has worked as musician for Giuliodorme, Daniele Groff, Gazebo, Brusco, Ratti della Sabina, La Batteria, Diaframma, Alberto Camerini, Damo Suzuki, Piotta, Fabrizio Moro and many other artists. He is also the singer and bassist of the band "Musica per organi caldi" together with Emiliano Rubbi. He recently finished recording the new album with James Rio on drums. On March 26 2021 the new single "Mi vuole sigillare (Gates)" will be released. The song is about the current issues of the pandemic and monetary situation and the drama of forced imprisonment due to the lockdown filtered through economic desperation and an increasingly evident and mounting collective hysteria are described. In the background a society governed by oligopolies and occult powers that manipulate and sleep the minds of anesthetized puppets in front of their TVs. It is the first episode of many singles that will be released and will be part of a Concept Album.