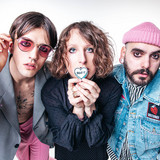 Tribe Friday is a band of guitar slinging emo kids from the woods of Sweden who marry the rugged indie rock dancehall sounds of the early 2000s with Gen Z post-pandemic party vibe bliss. Upbeat songs about self deprication, identity, confusion, love and death are anchored by sarcasm, wit and charm. Started as an after school project to combat boredom (or as lead singer Noah Deutschmann puts it; "it was either play sports, do drugs or start a band, we just picked two"), Tribe Friday debuted with the garage rock-ridden Trying Your Luck EP in 2019. The release was followed by the band's first US+EU tours, while also earning them a spot as openers for Swedish rock legends Mando Diao. In 2020, the group (which also includes Isak Gunnarsson, guitar, and Robin Hanberger Pérez, bass) evolved their songwriting and production skills rapidly, resulting in genre-bending sister EPs Chasing Pictures and Waiting For A Sign - both garnering extensive national radio play in Sweden and Germany. Despite COVID, 2020 also saw the band's return to the US for shows in NYC (at the legendary Mercury Lounge) and LA, where they played School Night - the tastemaker's showcase which has previously seen the likes of Billie Eilish. After a pandemic-proof DE tour, the band wrapped up the year with a 'Group of the Year' nomination at the prestigious P3 Guld awards, paired with their first national TV performance at Musikhjälpen. The stage is now set for an explosive 2021: Tribe Friday's breakout year.