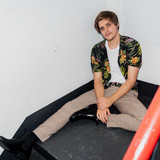 Harry Phillips is a singer-songwriter from Brisbane, Australia and the 2020 Billy Thorpe scholarship recipient at the Queensland Music Awards. Harry combines his love of writing memorable melodies with a social conscience to create pop songs with depth, that stand out apart from anything else on the Australian music scene. This refreshing change has been eagerly received by audiences in Australia with Harry's debut singles EMMA and Unexpected between them reaching #1 on the Triple J Unearthed Chart, #1 on the AMRAP Chart and being added to commercial radio around the country. Harry is known for energetic live shows to match his songs. His latest single Wristbands will be released on October 23rd, and is a nostalgic tribute to the joys of going to music festivals, something we're all missing in 2020. Harry first started songwriting in 2014 as a way to vent, after a severe sports injury left him unable to run for 19 months, and ended his athletic ambitions. During that time Harry also discovered an activist streak, and now volunteers with the AWLQ animal shelters, and tutors refugee families in English, he is a vocal advocate for ending Australia's inhumane refugee detention policy.