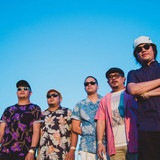 MEMBERS: Diego Mapa (vocals), Jason Caballa (guitars), Raymund Marasigan (bass synth), Mike Dizon (drums), RA Rivera (sound effects mixer). The mere mention of the members’ names might be enough to raise eyebrows and questions alike for they themselves are eminent in the realm of music. But wanting to try playing a different music in a world where rock music is more appreciated, and bring dance music and a little bit more in the awareness of people, are the reasons why Pedicab got together. PEDICAB was formed out of each band member’s desire to play danceable, catchy punk rock, inspired by the likes of the Strokes, Gang of Four, Franz Ferdinand, and the Juan de la Cruz Band. The result is what the band calls now as “dunk”, the fusion of the words dance and punk. The band’s use of vintage analog synthesizers instead of the traditional bass guitar, as well as Diego’s quirky vocal style and eclectic lyrics, have given Pedicab a unique sound, reminiscent of ‘80’s synthpop, but with a garage rock flavor.

While the band’s seasoned lineup may be reason enough to attract curious listeners, Pedicab has managed to build a loyal following in a short span of time. RA’s visuals, which are projected onstage during the band’s sets, give Pedicab’s live show a distinctive performance-art edge. In fact so distinct, that only PEDICAB does this in the local music scene.