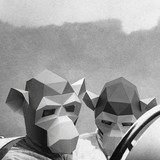 Marigold was born in 2010 in the rugged but strangely warm, industrial city of Borlänge in Sweden. But the first strokes of Marigold were actually fought earlier, when lead singer Daniel Wallsten decided to leave the country. The songs were written on the US west coast, and later brought back home to Borlänge and the producer Johan Nordin. The prodigy and drummer Viktor Olsson joined the band a couple of months later and Marigold was complete. Soon, the work with their debut album Vagabond began. When the album was released in the early summer of 2011, Marigold was playing on national TV and at Sweden’s biggest music festival among other venues. Now, Marigold started working towards a more organic sound with inspiration from bands such as ABBA and Fleetwood Mac instead. You could easily hear the 70’s but a few tracks sprawled and in December of 2013 the 80’s smelling EP “Och Så Kom Regnet” was released. The musical critics “best song of the year” lists had to be rewritten to make room for the main track City Farewell. The band momentarily interrupted the work in the studio to play at the legendary SXSW in Austin TX and The Original Oatly Break-Fest in London. In 2021, ten years after their debut, their fourth album Bonny & Goliath will be released. The album is the result of a long and winding producer collaboration with the pop genius Åke Olofsson of den Svenska Björnstammen. Marigold were always existential, but never as musically honest as with Bonny & Goliath.