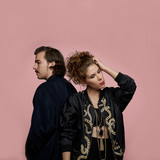 “For fans of Haim & Warpaint... BLØSH restores hope in Indie Pop” – Indie Shuffle. . "Unabashed, instantly enjoyable stuff that will have you – in the best way possible – thinking back fondly to your mid-00s indie days" – Wonderland. . "Hop aboard now - this ride's about to pick up the pace" - DIY Music. . The duo, which comprises Oslo-native guitarist Jørgen Berg Svela and Madrid-born cellist and singer Teresa Bernabe, have been carving out a name for themselves with their infectious sound since the release of their debut single in 2014. Since then they’ve gone from strength to strength, featuring on the likes of DIY Music, Wonderland and Hilly Dilly, alongside securing coveted airplay on BBC Radio, Amazing Radio, NRKP3 in Norway and Radio3 in Spain. Having gained the seal of approval from Dan Croll they also boast a recent nomination as ‘Newcomer of the Year’ in the critically acclaimed Norwegian music magazine GAFFA – and it’s not hard to see why. The duos debut-album 'Keep Bleeding Keep Breathing' was produced by Norwegian Grammy winner Øyvind Gundersen and saw the light through The 405's exclusive album premiere. The album gained momentum in the whole of Europe putting the duo in Eurosonic's Breaking Borders top 100 Charts, a list shared with only 4 other Norwegians: Alan Walker, Kygo, Aurora & Astrid S. Out of the 10 album tracks 7 made it to national radio in Norway, the latest being the collaboration with Hanne Kolstø «Nobody Knows» that was listed in NRKP13.