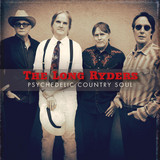 Nov 30, 2108 saw the release of two box sets containing three CDs each. One was for their 1985 classic LP, State Of Our Union, and the other was for their 1987 LP, Two Fisted Tales (Sid's fave LR's LP). February 15, 2019 saw the release of the first new Long Ryders studio album in thirty years, Psychedelic Country Soul. It soon hit NUMBER ONE on both the official UK Americana/Alt-Country charts and on Amazon UK's Americana chart. Produced by the band's dear chum Ed Stasium (Ramones, The Smithereens) it is the band's best album and has all the hallmarks of the band who kick-started Alt-Country and Americana.

Like their peers in the L.A. Paisley Underground movement of the '80s, the band loved the sounds of the '60s, but the Long Ryders were