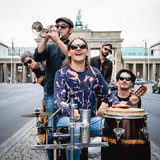 Based in Berlin, but originally from Argentina, Venezuela, Chile, Germany and Italy, they unite Latin American culture in their songs. With influences from Berlin they process their experiences with the so-called culture shock as immigrants. Their rhythms vary between pop, ska, cumbia, tango, cuarteto and electro with german and spanish lyrics. In a humorous way they tell of the typical misunderstandings of two cultures that meet one another, and of their similarities between the differences. The name Feierabend was chosen because in Spanish there is no word for leisure time after work and because it also means integration for the band members, because you have to have a job to enjoy your Feierabend time at Poetic Cumbia.