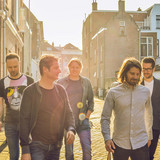 The music of these five men from Tilburg/Breda/The Hague (The Netherlands) comprises a wide variety of beautifully completed melodic guitarpop songs, that each tell their own story. Sometimes lively, sometimes melancholic, but fascinating in both the small and the large. Lyrically, fragile, always brought with full dedication and energy that is contagious for everyone who beholds them. The band is unique in its kind, due to the powerful voice of the singer and fretless bass sound of the bass player. During live performances at the 3FM shows 'Nachtegiel' and 'Ekdom in de nacht' Awash was compared with bands as Editors, Racoon and REM, but the strong unique sound is preserved. The fanatical drive to make music brought Awash already at various festivals, a tour through the UK, and larger Dutch music venues such as 013, Paard van Troje, Mezz and as a support act for James Walsh. After the well received album 'Turn The Lights' (2013) and EP 'Carry On' (2015), the band has released their second album 'Waiting Words' in April 2018. Recordings as diverse as life itself, autobiographic but also written from a different perspective. Where the previous album 'Turn The Lights' was a journey to happiness, this latest album features a selection of every day life as we know it. The 2nd of April there new single 500 miles wil be released!