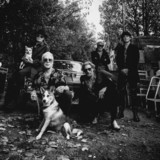 South London’s beloved roots-futurists Alabama 3, as much as any of us these past couple of years, have been through a trial by ordeal. Like the true people’s champs that they are, they’ve not just survived it, but emerged stronger, and even wiser, with a new album, ‘Step 13’, which refuses to wallow in self-pity. Instead, the war-torn Brixton collective triumph according to their own peerless standards of cross-pollinating experimentation, street polemic and Class-A weirdness. Still adored the world over for 1997’s inaugural smash ‘Woke Up This Morning’, whose marriage of Howlin’ Wolf samples and trip hop beats provided the theme music for long-running HBO series ‘The Sopranos’, Alabama 3 have continued to explore their uniquely British absurdist twist on Americana, riven by post-rave aesthetics, savage socio-political satire and lowlife narcotic misadventure. “I think the album’s rooted in a deep love for community, for the weirdos and misfits on the margins who make life in the city marvellous,” Robb Spragg (Larry Love) summarises. “Beneath the decadence, it’s very much about survival in a pandemic, without recourse to sentimentality, or overdoing it. Dealing with Jake’s death certainly informed the soul of the LP, and maybe in the context of global COVID deaths his dying felt ends up being part of some sort of universal theme. Hopefully, there’s a balance between post-Jake and pre-Jake on the album, and both together creates a future.