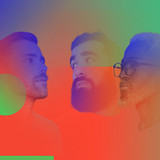 Throes + The Shine were born in 2011 in the heart of Porto. A communion between Portugal and Angola, they are characterized by a hybrid of kuduro (Angola’s explosive dance music), electronic sounds and rock ferocity. They’re stage presence is tremendously exciting and contagious: moving bodies and smiles are the common denominator in the crowds that are present in those moments. After three records in several independent labels and hundreds of shows in over ten countries, they are preparing an ambitious new record and excited to cross new borders and take their cultural blend to every corner of the world.