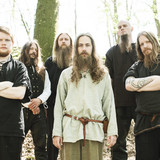 Svartsot was formed in 2005, setting music to tales of Danish history and folklore and sung in their native language. The music is melodic death metal with the melodies inspired by folk music and medieval music, and supported by traditional folk instruments. The band consists of lead guitarist, composer and lyric translator Cris J.S. Frederiksen, vocalist Thor Bager, Hans-Jørgen Martinus Vork Rosenwein on folk instruments, bassist Simon Buje, guitarist Michael Alm and drummer Frederik Uglebjerg. The band’s early style was characterised by relatively straightforward riffs and melodies and simple song structures with additional folk elements provided by Stewart C. Lewis on the whistles and bodhran. The debut album ‘Ravnenes Saga’ was very well received by fans and touring activity with Tyr and Alestorm helped cement the bands reputation and following.

After line-up changes in 2009 the music and lyrics began to increase in depth and complexity and evolved through the release of their three subsequent albums with further folk instrumentation added in the form of bagpipes and accordion. 'Mulmets Viser' was released in 2010, 'maledictus eris' in 2011 –the band’s first ‘concept album’ about the Black Death in Europe in 1349 – and most recently ‘Vældet’ in February 2015 about the rituals, superstitions and celebrations of a traditional Danish Midsummer’s Eve in medieval times.