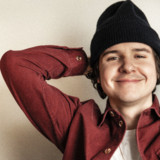 With the 2016 global debut and multiplatinum smash “7 Years,” Lukas Graham solidified their status as one of the biggest breakout acts in music, racking up over 23 million units worldwide, hitting #1 in 13 countries and garnering three GRAMMY® nominations. The song transformed Danish singer Lukas Forchhammer’s life into a whirlwind—a world away from his beginnings, born on a couch in Christiania, an impoverished quasi-commune located in the center of Copenhagen. Alongside his “boys”–Mark “Lovestick” Falgren (drums) and Magnús “Magnúm” Larsson (bass)–Lukas Graham traversed the globe on sold-out tours, played the biggest stages from The Grammy Awards and Good Morning America to The Billboard Music Awards, plus earned acclaim from the likes of The New York Times, Rolling Stone, Billboard, and NPR. But Lukas is far from content with the accolades: He’s restless and ready to be known as an artist that supersedes any smash he may have, past or present. Now engaged and proud father of a little girl, Lukas has poured the gamut of his life experiences into his new album 3 (The Purple Album), led by heartfelt single “Love Someone.” Lukas goes deeper still throughout the album, revealing his vulnerabilities and his fears, his sadness and his joy. While the self-titled debut was dedicated in large part to Lukas’ late father, 3 (The Purple Album) is for his new family of three, and showcases a special kind of alchemy: easy pop hooks alongside soul-baring poignancy.