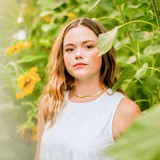 Growing up on the Gulf Coast exploring its shores and wetlands, Kate Kelly, a now Nashville-based jazz and folk-influenced artist, invites her listeners to dig into the roots of her image-invoking writing just as she once dug her fingers into the roots of the earth in Alabama. Music was synonymous with childhood from the start, but when she obtained a scholarship through Bayfest, a music festival originating in her hometown Mobile, she used the funds to purchase her first guitar at age 15. Journaling and acquainting herself with the lifelong relationship the artist has with their instrument was simultaneous, and when her journal entries morphed into songs and her guitar-picking found its way around melodies, songs became a self-healing medicine for Kate, and still are.   Kate Kelly began sharing her remedies in 2016 with her debut EP New Heartbeat, and in 2018 she released her first full-length record The Wonder of It All. Through her music, Kelly makes themes of losing innocence, heartbreaking revelations, and relationship growing pains feel lighter and more reachable. Her voice doesn’t hide behind facile affectations and contains a pleasant warmth nostalgic of Feist and early-career Ingrid Michaelson. She’s currently co-writing and dreaming up plans for new releases. More recently inspired by artists like Phoebe Bridgers, she’s exploring a more indie-folk, ambient sound, and her upcoming single “Quiet as a Mouse” reflects this new direction.