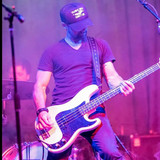 Bourbon Therapy was born out of Aaron Skiles's realization that the best therapy may just be music...and bourbon doesn't hurt either. After picking up the bass as a freshman at the United States Military Academy, West Point, Aaron bounced around in various rock bands from Seattle to Baltimore to New York to San Francisco. With over 20 years of experience as "just the bass player," Aaron decided to step out on his own. Bourbon Therapy is based in Oakland, California. They are an indie rock/alt-country band fronted by the husband and wife duo of Aaron and Rebecca Skiles. Their style of upbeat music combined with downtrodden lyrics is reminiscent of the mid-90's Counting Crows or Soul Asylum combined with the modern The Head and The Heart or Silver Sun Pickups. By mixing big guitars with piano, strings and even an occasional harmonica, their sound ranges from heavy riff-laden songs to expressive ballads, providing a dynamic range of anthemic tunes. Bourbon Therapy's latest album, Hymnals and Hangovers is an expansive progression from their debut, self-titled album. Highlighting the beautiful vocals of Rebecca Skiles and featuring multi-part harmonies, upbeat instrumentation, and catchy choruses, the album crosses several genres (Americana, 90's Rock, Folk Rock, Indie Rock and more) to deliver an emotional, catchy ride from start to finish.