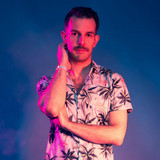 Bright Light Bright Light is the moniker of award-winning and proud LGBTQ+ artist Rod Thomas. The only unsigned artist to date to perform on Graham Norton's BBC One TV show, he has toured with Cher, Ellie Goulding and John Grant and toured AND recorded with his heroes Elton John, Erasure and Scissor Sisters. His 4th album 'Fun City' will be released in 2020, and his 3 albums Make Me Believe In Hope, Life Is Easy and Choreography have won fans of critics and artists alike. His music is hugely influenced by cinema: his name comes from 80s horror film Gremlins, and most recent album Choreography was inspired by dance sequences from his favourite films, including 'Mannequin', 'Flashdance' and 'Romy & Michele's High School Reunion' whose star Alan Cumming features on the album. He also runs his Romy & Michele's Saturday Afternoon Tea Party - by Bright Light Bright Light (pre-COVID at Alan's NYC bar) online at http://twitch.tv/brightlightx2 and updates the party playlists each week on his Spotify playlist. He's written with Bananarama on Tonight - Bright Light Bright Light Remix and remixed Dannii Minogue, Erasure, Kelis and many others. And aside from music he's an active advocate and fundraiser for numerous LGBTQ+ charities.