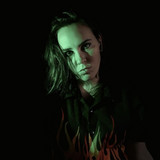 Violence and melancholy, sweetness and brutality -- SIERRA blends various styles and moods to create her own unique brand, inspired by synthwave, EBM and darkwave. She released her first EP entitled “STRANGE VALLEY” in 2017. With their dark and vivid undertone, the six tracks describe a journey beyond an uncanny desert. In May 2019, she released “GONE”, her second EP. That same month, she gave her first live performance at STUNFEST, a gaming convention who had previously hosted well-known artists such as Perturbator and Carpenter Brut. In June 2019, she performed at Le Petit Bain during the cyberpunk show Retro Synth Fury and was then the opening act for the American band MAGIC SWORD in September in Anvers. She performed in the US for the first time in New York on October 31, 2019 during the NightWav party. In February 2020, she was the opening act of Carbon Killer’s European tour across 7 countries. In December 2020, she released her third EP: “ALL ABOUT LOVE”.